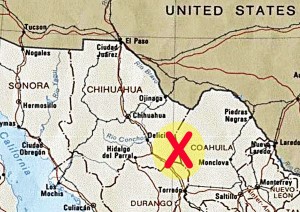 Located just across the international border and a bit south of Ojinaga is one of the world’s most mysterious areas, Mexico’s “Zone of Silence.” Scott Corrales says, “Magnetic aberrations make radio communications impossible in certain parts of the area, which is formally known as the Vertice de Trino: the place where the borders of the Mexican states of Durango, Chihuahua and Coahuila join between the twenty-sixth and the twenty-eighth parallel.”

Witnesses say that compasses spin wildly here, radios fail to work, and batteries suddenly lose their charge. This area also has a long history of unidentified aerial phenomena and is the place where some of Mexico’s earliest recorded “UFO sightings” occurred. According to Corrales, “A truly spectacular sighting was reported one evening in September 1976 around 8:59 p.m. when residents of Ceballos noticed the overwhelming presence of a giant object on the outskirts of their community. At least two dozen residents gathered on Ceballos’s main street to watch the ‘craft’ hanging in mid-air, as if waiting for its cue. The baleful machine, if machine it was, was estimated at some 300 meters long and with an overall rectangular shape. Lights surrounded the object, changing from green to blue to white, pulsating to a dull, humming sound coming from deep within its recesses. The eerie situation was made worse by all the dogs in the town suddenly howling and barking in unison.”