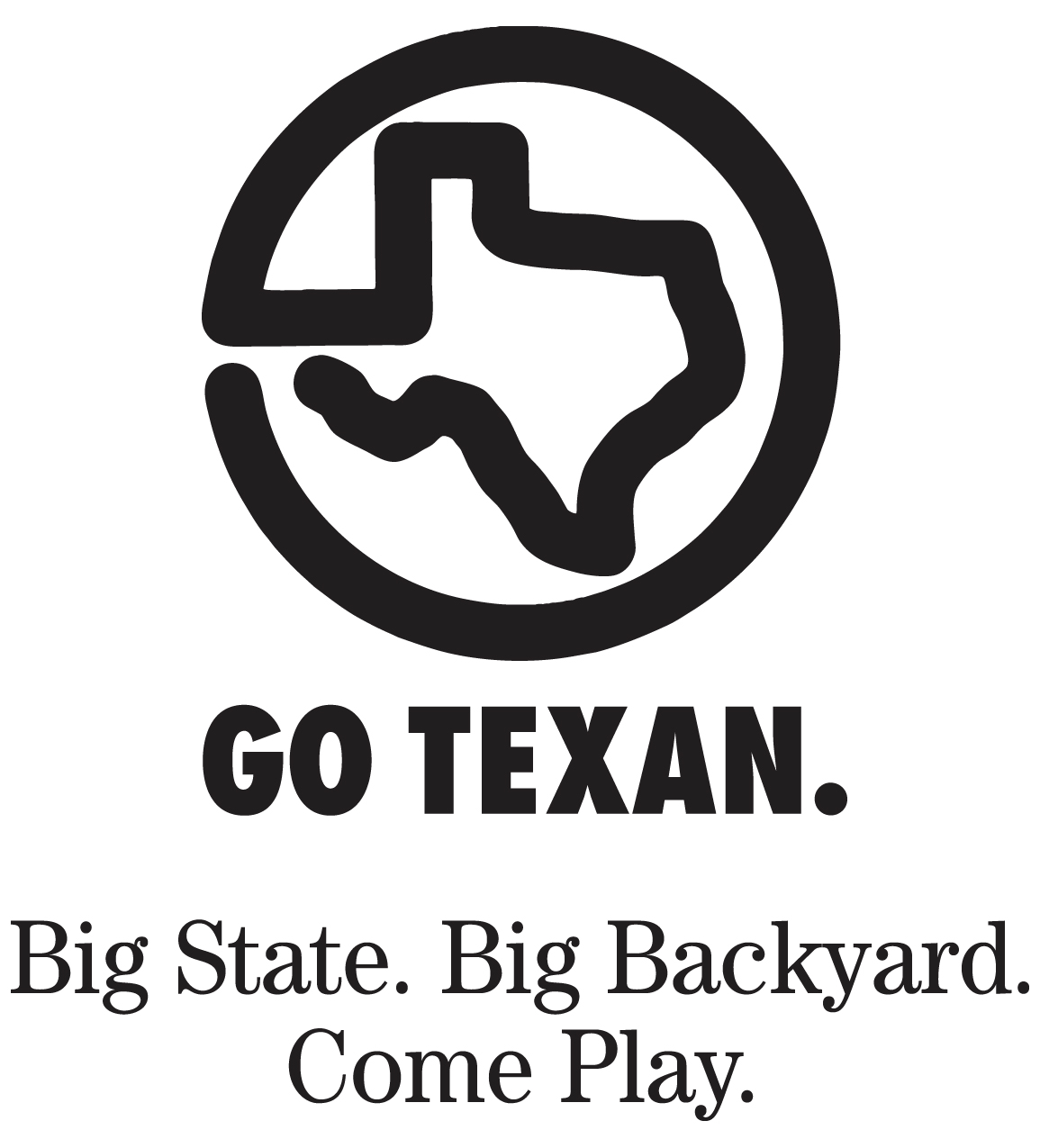 October 28, 2016, Texas Dark Skies Festival Focuses on Astronomy and Dark Sky Preservation in the Presidio Public Schools.  The Public is welcome to attend the school assemblies.

Lucy Franco Middle School at 9:30 am 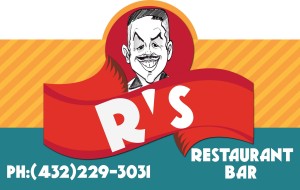 Make your plans now to attend during the Halloween weekend. It’s Four Big events in the beautiful Big Bend on the same weekend!!!

The Texas Dark Skies Dude of the Dead Music Festival will be held October 29, 2016. This year we feature two new awesome events  with the Disco Mexicano Cook off. . On the same weekend, Presidio will rock to the spectacular sounds of the “Dude of the Dead” Music Festival.

Admission is Free to ALL Events

3 Student Assemblies in the schools with McDonald Observatory Astronomers

The next day the Fun Continues…

DUDE OF THE DEAD MUSIC FESTIVAL

In PRESIDIO SATURDAY IS DUDE OF THE DEAD DAY 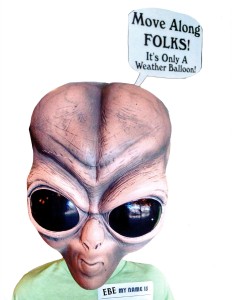 WHAT HAPPENED TO EBE GEBE?

With the Name change of UFO Border Zone Festival to the Texas Dark Skies Festival Ebe fell on hard times, unemployed, homeless, so the Presidio Tourism Department hired Ebe to be the Guardian of the TEXAS Dark Skies.  Look for Ebe at all the events and take your photo with him for your Facebook page.  Friend EBE GEBE on Facebook and keep up with current events about both the TEXAS Dark Skies and the Dude of the Dead Music Festivals. 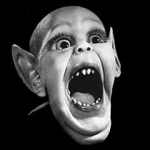 After Party at R’s Restaurant and Bar.

On April 30, the Texas Senate passed a resolution (SR 656) recognizing that Big Bend Ranch State Park in Presidio has some of the darkest skies in the world and also commending Presidio for its new “Texas Dark Skies Festival.” To read the resolution in its entirety, go to https://legiscan.com/TX/text/SR656/2015. 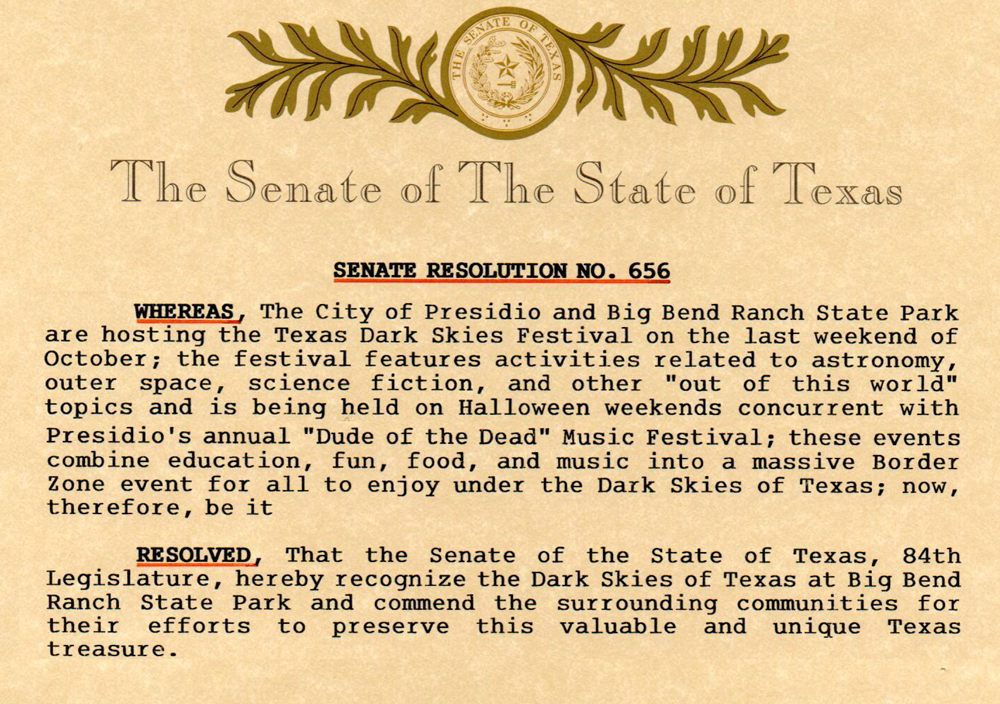 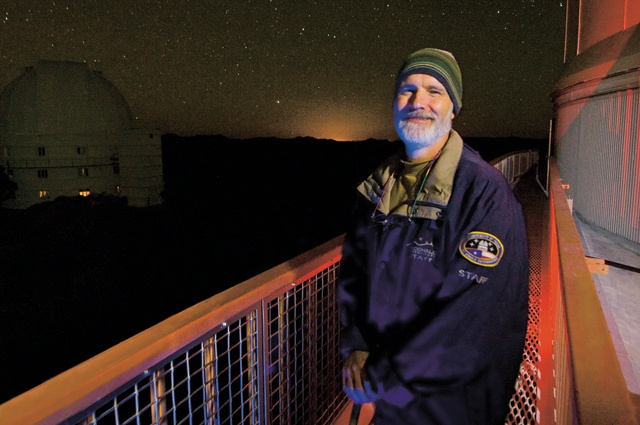 Bill Wren was featured recently on the CBS News “Sunday Morning” program, in which he is referred to as “the Angel of Darkness” because of his efforts to make the Big Bend area one of the darkest spots on the globe. According to CBS, the darkness is “thanks to men like Bill Wren, a veteran astronomer at McDonald Observatory, the largest and one of the busiest optical telescopes in North America. It sits atop a west Texas mountain. Wren’s nicknames include the ‘Angel of Darkness.’ And what does that mean? ‘Well, just that I’m the light police,’ he laughed. Saving the darkness of the night sky is his mission. Using grant money, he offers free light fixtures that aim light down and away from the night sky.Wren and others also helped change building codes to make ‘down’ lights mandatory in seven counties covering 28,000 square miles.” Below is the TV segment in which Bill appears:   http://www.cbsnews.com/news/preserving-the-starry-starry-night/

YOUR TOUR GUIDE TO THE STARS IN THE TEXAS DARK SKIES

Stephen Odewahn has been a resident astronomer and Research

Scientist at McDonald Observatory since 2003. He received his

Ph.D. under Gerard deVaucouleur at the University of Texas. He

has specialized in the use of large digital sky surveys and

evolution using large ground- and space-based telescopes. He has

taught and conducted research at The University of Minnesota,

The California Institute of Technology, and Arizona State

“Dark Sides” of astronomy. We hear a lot today about dark matter

and dark energy. Steve will describe what these things mean and

explain some of the exciting work happening today at McDonald

Observatory that is helping to push or knowledge forward in these

Why Presidio’s Dark Night Sky is Ideal for Sky Watching

The Presidio area has one of the darkest night skies in the world. The areas just outside of town around Cibolo Creek Ranch and also at the Big Bend Ranch State Park measure a “Class 1” (absolute darkest skies) as measured on the Bortle Light Pollution Scale.

The scale is a nine-level numeric scale that measures the night sky’s brightness of a particular location. It quantifies the astronomical observability of celestial objects and the interference caused by light pollution. John E. Bortle created the scale and published it in the February 2001 edition of Sky & Telescope magazine to help amateur astronomers evaluate the darkness of an observing site, and secondarily, to compare the darkness of observing sites. The scale ranges from Class 1, the darkest skies available on Earth, through Class 9, inner-city skies.

The following image shows light sources for the state with the arrow pointing to the dark area in the Big Bend: 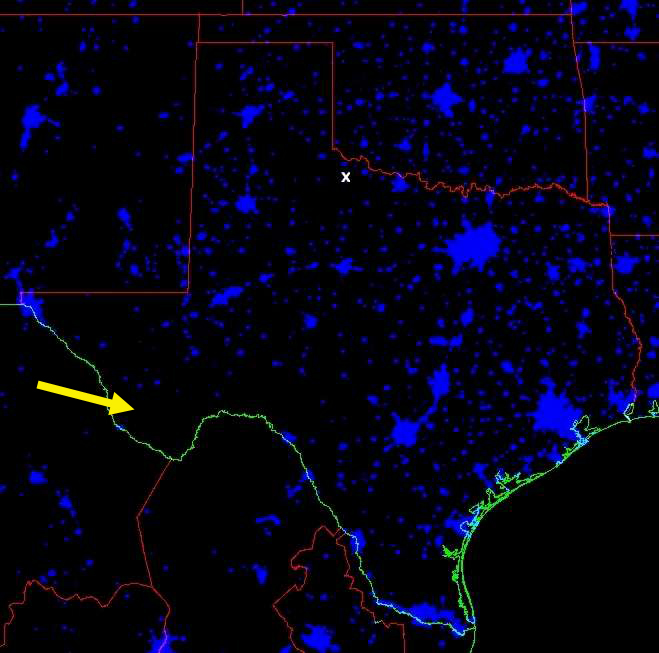 More information about Presidio’s Dark Skies is at:
http://cleardarksky.com/c/BgBndRSPTXkey.html?1

Question:
What is a light-year and how is it used?

Answer:
A light-year is a unit of distance. It is the distance that light can travel in one year. Light moves at a velocity of about 300,000 kilometers (km) each second. So in one year, it can travel about 10 trillion km. More precisely, one light-year is equal to 9,500,000,000,000 kilometers.  Breaking it down some, its still too difficult to conceive….A light-year (abbreviation: ly), sometimes written light year, is a unit of length used informally to express astronomical distances. It is approximately 9 trillion kilometers (or about 6 trillion miles).   So if you could wrap a light year around the earth at the equator that is 24 901.5 miles. that is approximately 236,075,151 times around the Earth at the equator to cover one light-year length. Definitely … a bunch…

Why would you want such a big unit of distance? Well, on Earth, a kilometer may be just fine. It is a few hundred kilometers from New York City to Washington, DC; it is a few thousand kilometers from California to Maine. In the universe, the kilometer is just too small to be useful. For example, the distance to the next nearest big galaxy, the Andromeda Galaxy, is 21 quintillion km. That’s 21,000,000,000,000,000,000 km. This is a number so large that it becomes hard to write and hard to interpret. So astronomers use other units of distance.

In our solar system, we tend to describe distances in terms of the Astronomical Unit (AU). The AU is defined as the average distance between the Earth and the Sun. It is approximately 150 million km (93 million miles). Mercury can be said to be about 1/3 of an AU from the Sun and Pluto averages about 40 AU from the Sun. The AU, however, is not big enough of a unit when we start talking about distances to objects outside our solar system.

The Texas Dark Skies is the perfect place to see what’s really “up there.”  You never know what you will see in the Dark Skies of Presidio.

At the Dude of the Dead

Other Performances To Be Announced

Local Favorites for sure: