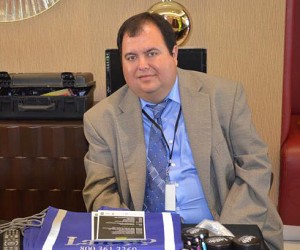 Ismael Cuellar, a law enforcement agent in Laredo, Texas, is director of the Laredo Paranormal Research Society (LPRS), a group that uses cutting-edge scientific instruments to investigate paranormal phenomena, such as UFOs, mystery orbs, spirit entities, and more. Ismael and his group speak frequently to groups, demonstrating the techniques they use for detecting things that cannot normally be seen by human beings. He was a featured speaker at the 2011 & 2012 Laredo UFO Conferences, the Edinburg UFO Conference, and the Border Zone UFO Festival.

Ismael reports that he filmed the incredible footage shown below on the night of October 23, 2011, using night vision technology. The object could not be seen by the naked eye. Before releasing this video to the public, LPRS had it carefully analyzed by a number of film experts who subjected it to various tests using filters. It remains completely unexplained.

Ismael said, “Our latest and most fascinating encounter came in October 23, 2011 while panning the night sky with our third generation night vision appeared an object over northeast Laredo. The craft was totally shrouded in infrared light which is invisible to the naked eye. Resembling a triangle and with spheres at each of its vortices, this ufo had no sound of any propulsion and silently cruised at approximate altitude of 1000 feet and traveling around 80mph in a southerly direction.

“This UFO footage was personally reviewed by Jaime Maussan during his visit to Laredo. Along with Momo entertainment both were surprised with the footage. Mr. Maussan was so amazed with the video that he made a short documentary of the phenomena on his televised show called Tercer Millenio which predominantly airs in Mexico. Once the footage was added to Jaime Maussan’s YouTube channel it managed to receive over 45,000 views.

“LPRS took the captured evidence a step further by using the professional experience of a videographer Jose Carlos Rodriguez, who currently works for the federal government. He managed to enhance the video using a software with different types of filters that brings out the actual solid structure of the object.

“After examination of the newly enhanced video it appeared that the craft had an additional sphere and vertice hidden in its shrouded infrared cloak. Resembling a four sided pyramid with its apex pointing in the direction of its path. The captured phenomena proved that Laredo has its share of ufo activity in its own night sky.”

Below is a report by Laredo TV on Ismael’s release of this astonishing video: